Signs NCAA Letter of Intent to play baseball at

Quote from Kent State's website:  Willeman rounds out the early signing class.  The 6'2" right-hander out of Napoleon High School compiled four wins and 77 strikeouts in 57 innings his junior season.  He also helped his summer team, the Napoleon River Bandits, to a 2013 Ohio American League state and regional title while recording eight wins in 98 innings, only allowing 68 hits while striking out 124 batters.

"Zach is a very, very dynamic right-handed pitcher who mixes an 87-90MPH fastball with a very hard, upper-70's breaking ball and a developing change," said Duncan.  "He is extremely confident and again, a great student.  He's one of those guys who gets stronger as the game goes on." 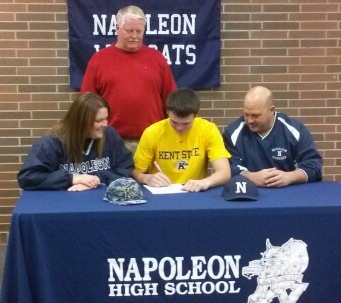 Enjoy Pictures of the 2013 Championship Season

Select this link to enjoy the memories of the 2013 Championship Season!  This album can also be selected from the Photo Album tab, found on the lower, left menu bar.

A Note to Prospective River Bandits:

Who scouted the River Bandits this past 2013 summer?

We had NUMEROUS NCAA Div. II & III, NAIA and Juco's attend, as well.

Did you know that the River Bandits have had FIVE players play in the MAJOR leagues since 2007!!  Can any other summer program say that?  Can any college or university stake that claim?  Ohio State hasn't............as far as that goes, the Big Ten CONFERENCE can't say that!!!

There are LOTS of "travel ball" teams popping up all over the State of Ohio and many will promise a lot of things such as exposure, college scholarships etc.  The Napoleon River Bandits have been doing this since 1998!!  College coaches are well aware of our existence and the quality of our program.  Many have acknowledged us and have given us kudos on how well organized our program has been over the years!

The River Bandit coaching staff does NOT get paid!  We have a PASSION for the game and will always have the best interest of the players at heart!  These travel ball teams have PAID coaches (who may or may not be as qualified as we are) PLUS hotel bills are ON TOP of your initial investment.  The Bandits fee covers uniform, travel AND hotels.  You also get the opportunity to fundraise the fee with us AND earn spending money.  We had 14 of our players who didn't have to pay a dime this year!!

When I started the Bandits in '98, my goal was to get as many players to the next level as possible and I think we have done an excellent job at that.  For those of you who don't know me, I umpire in the Big Ten, Mid American Conference and have worked the D2 World Series twice.  I have umpired for over 30 years at the college level and I know almost all of the coaches in the entire Midwest.  Don't you think that may be an advantage to any Bandit that wants to play at the next level?  When I go umpire at Ohio State, Toledo, BGSU, or wherever, the first thing the coaches ask me is "Bach, do you have any players I should be looking at?"  That is a BIG TIME advantage and I always promote wherever I can.

TRAVEL BALL - I umpired a Division 1 game this year, and at the plate meeting, both coaches wanted to get their 2 cents worth in on the downside of travel ball.  Both coaches stated that kids that they have recruited who play travel ball, come into their programs feeling as if they are ENTITLED to playing time and that their work ethic is totally different than other kids they recruit.

Now, I don't want to bash travel ball, because they do end up with some quality players, but what are you expecting to get out of it?  If it's exposure, our 16-year existence proves what we can do for you.

I have managed, sponsored and financed a summer baseball team since 1974, way back in the day when I started the Van Wert Orioles.  It was a college age team that started well before all of these other summer college programs even existed.  Tom Held (Defiance HS), Tim Held (Moeller HS), Trent Dues (Vandalia-Butler HS), Brad Schroeder (Ottawa) and Jeff Brunswick (Archbold HS) are just a few of the people who played for my Van Wert team.  The Bandits got their start in 1998 and we continue to improve the program each and every year.  Although I can't promise you 40 more years, I can guarantee you the River Bandit program will always be run in a first-class fashion, and the people associated with the Bandits will always be top-notch people!

If you would have any questions or concerns, you can always email me at randyjbachman@yahoo.com 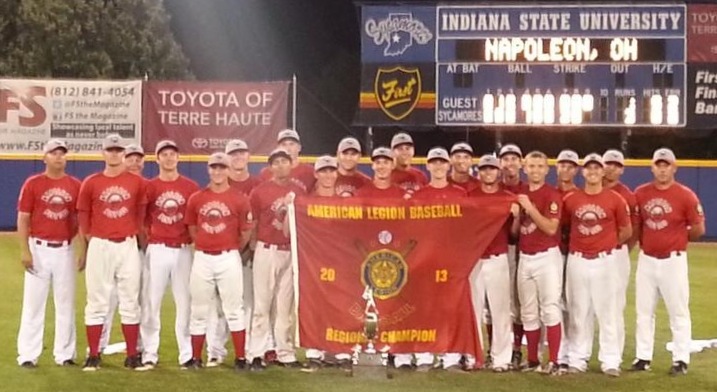 Krauss said of his MLB debut, “It’s a dream come true, to be honest,” Krauss said in the MLB.com story. “It’s one of the most iconic places you can think of. When you think Major League Baseball, you think of Wrigley and Fenway, the history and tradition of these places. To be able to start here with the atmosphere they have, especially with these day games on the weekends, it’s pretty awesome. It’s pretty close to home, as well.  “It’s been great,” Krauss said. “It’s been a truly memorable experience and hopefully I’ll have some more memories to remember after today.”